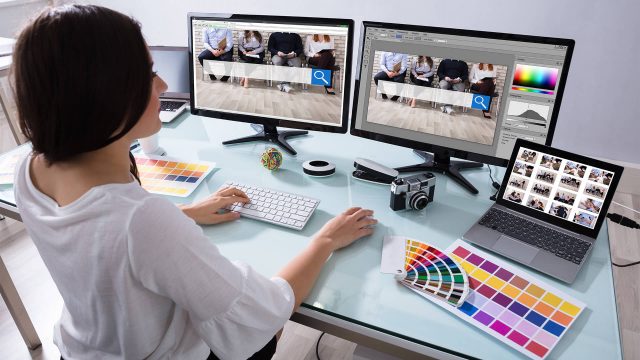 Ten years ago, web design was seen as the industry of the future. Millions of people worldwide sought out qualifications in web design because they thought the job was future proof. They had every reason to think that. The internet was growing exponentially, small and medium-sized businesses were falling over themselves to get online and start making money through the internet, and bigger companies were already making billions of dollars a year that way. It was logical to think that the web would only get bigger over time, so there would be an ever-increasing demand from businesses looking for people to build them shiny new websites. Unfortunately, those wide-eyed young web designers might have underestimated the pace of change.

Many of the suppositions we just mentioned are still true. The web is still growing at an exponential rate. It’s even more important now for a business to have a web presence than it was ten years ago. In some cases, they need an app presence, too – another job that used to fall into the hands of a qualified designer. More money is being spent on the internet than ever before, and businesses of all sizes are profiting from that trend. It’s just that they no longer need the assistance of web designers to get themselves there. We have officially entered the era of “low code, no code” web design.

For those unfamiliar with the term, the easiest way to describe it would be to say that it’s exactly what it sounds like. It’s a form of web design that requires you to know very little – in some cases, nothing at all – about coding. All an aspiring designer needs to do is drag the pre-made forms and objects they’re looking for into place, and the automated design software will do the rest. That includes scaling the page and its features so it has a uniform appearance on all devices and platforms – something that’s always been difficult to achieve for designers working by hand. A range of customisation options on a typical low or no-code platform will allow a user to upload their own logos, graphics and images to make the page their own, as well as providing full appearance customisation options for all of the pre-made objects. There’s no doubt that someone who’s learned web design at university or college is still more skilled than someone who uses a low code solution, but if the end result is almost the same, the level of training doesn’t matter.

None of this is what professional web designers want to hear. They invested time and money in their skills with the belief that they would make all of that money back – and then some – in their long careers. Instead, they might be no more than five years from the job centre and the unemployment queue if this idea continues to catch on the way it is at the moment. Statistics tell us that medium-sized companies are already opening themselves up to the low or no-code approach. Smaller companies got there long before medium-sized ones because of the savings on budget and time. It makes little financial sense to pay a web developer to spend a month making you a website when you can do it yourself in a few days with a little applied knowledge. When big businesses wake up to the same idea, it really might be game over for web designers.

No code and low code web design solutions are only as good as the companies that make them, but the best of those companies are very good indeed. Bubble and Webflow have already made waves in the market and are having excellent years, as are Airtable and Creatio. More important than any of them, though, is Google App Maker. The tool already offers a no-code method for making business apps and is branching out into web design. Any product of this kind that has the power of Google behind it is bound to reach a wide audience, and doubly so if Google includes features that optimise SEO rankings as part of the design process.

To compound the problems posed to web designers by no-code solutions, white labelling is now increasingly common among no code and low code providers. In essence, this means that a company can take a product it didn’t make, rebrand it, and claim it as its own. This is one of the most basic ways of making a website, but also the cheapest and the fastest. We’ve seen it used a thousand times to make online slots websites. In fact, given the number of online slots websites that have launched in the past five years, it wouldn’t surprise us if the number was above one thousand. Being what is effectively a “flat-pack website” doesn’t stop most of these online slots websites from making significant amounts of money. If you think that larger companies might be put off by such an idea, here’s an alarming fact for you – the coffee sold by Costco is actually made by Starbucks. You’re getting the same coffee from both places, and both companies are making phenomenal amounts of money by selling it to you.

Once a cat has escaped from a bag, it’s usually impossible to put it back in again. The low code, no code method is a long way out of a bag and not only is it not going back in there, but there’s also no good reason to try. Just as movie projectionists, word processors, video store clerks and switchboard operators lost their jobs because of advances in technology, web designers are about to do the same. Your knowledge of web design might enable you to do some impressive tricks, but your skills are likely to become useless as anything more than a hobby. The sole exception, ironically enough, might be if you can get a job for the companies that create no code or low code web design products. Someone has to put their code together for them, and only a very skilled web designer would be capable of such a thing. As the old saying goes – if you can’t beat them, join them!

A website is a very important and powerful marketing tool today and many companies now recognize this fact. Having a website is one effective way of reaching out to a global audience and promoting a company’s products and services.

But it takes a skilled designer to create an attractive and fully functional website. It is, therefore, a must for organizations regardless of their niche to get the help of a web developer who can create a website according to their requirements. END_OF_DOCUMENT_TOKEN_TO_BE_REPLACED

Most businesses need a website at some point in their evolution. To the average person with no technical background, the process of building a website can seem nebulous. Even people with a background in technology can become daunted by the task of developing a website. The amount of planning involved is extensive and requires thinking ahead.

With an emphasis on beautiful design and cool features, many business owners want to follow the latest trends, but that may not be necessary. Depending on what goals you want your website to accomplish, you might be better off creating a simple design on your own instead of paying for a $10,000 custom WordPress project. END_OF_DOCUMENT_TOKEN_TO_BE_REPLACED